TLA 2020: Forks in the road for forest industry

TLA 2020: Forks in the road for forest industry

The Truck Loggers Association (TLA)’s 2020 convention in Vancouver from Jan. 15-17 sought to provide attendees with a clearer vision of what’s to come during a very difficult time for the lumber industry in B.C.

But with fingers being pointed at high stumpage rates, a push for diversification of tenure, stalled projects due to razor-thin profit margins disappearing, waste penalties, and an overall acknowledgement that changes are needed at a time when government is loath to provide support during touchy negotiations with the United States, you very well might miss the forest for the trees.

Some good news did come to the conference in the form of Russ Taylor’s forward look at the global market, along with an explanation for this past year. The managing director of Forest Economic Advisors-Canada, Taylor said, “The question I’ve been getting a lot this year is ‘Why was 2019 so bad?’”

He noted that average growth in global lumber demand over the past 20 years (factoring out the 2008 and 2009 recession) is about 2.2 per cent. 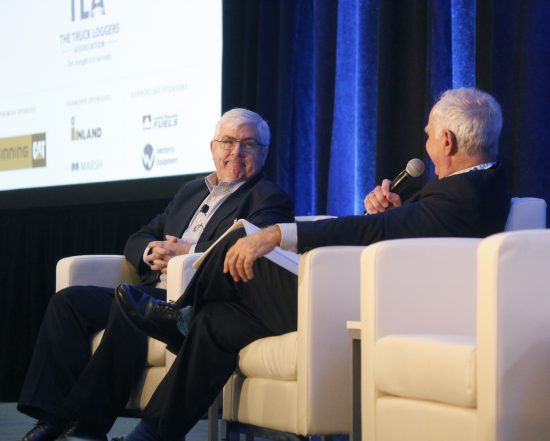 Russ Taylor (left), managing director of Forest Economic Advisors-Canada, takes questions after his talk on the future of the forest product market. Photo by Adam Kveton.

However, Taylor said that he expects better things for 2020, saying, “we’re projecting somewhere around two to two-and-a-half per cent [growth]. Capacity curtailments in North America especially are not going to be able to meet demand, so we expect some price spikes coming up probably this quarter, but maybe early second quarter. So, it should be promising going forward.”

But slow market growth wasn’t why B.C. in particular had such a bad go of it in 2019.

“You can get into any market if you’re competitive. If you’re a high-cost supplier, it doesn’t matter about markets, it’s all about your costs, and that’s the problem B.C. faced in 2019.” – Russ Taylor, FEA Canada

With Russia providing more and more exports to China, and spruce value in central Europe down due to wind and a rampant beetle problem, B.C.’s costs were just too high to compete due to stumpage, said Taylor.

“My simple logic is, looking at other markets as well, the stumpage rates stayed too high, no adjustments came in early enough, a squeeze play was on, so the economics are negative for the industry,” he explained. Read Taylor’s complete 2020 global lumber markets forecast here.

On the other hand, B.C. Minister of Forests, Lands, Natural Resource Operations and Rural Development Doug Donaldson said during his Friday morning question-and-answer period that he wouldn’t say the stumpage system is the problem.

He added that changing to a monthly stumpage rate would introduce too much volatility, and that doing too much to change the existing system could hurt national trade agreement talks with the U.S.

“We don’t want to be seen as politically intervening in the stumpage system in any way whatsoever when we’re in sensitive negotiations and trying to get a resolution on a softwood lumber deal because the U.S. lawyers are looking for any kind of inkling of that,” he said. 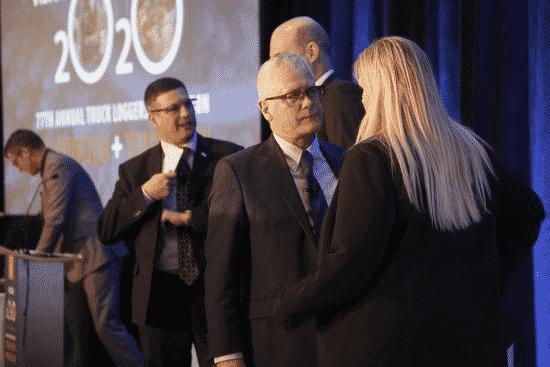 B.C. forests minister Doug Donaldson speaks with the Truck Loggers Association’s immediate past president Jacqui Beban after an, at times, tense Q&A with the minister on Jan. 17 in Vancouver at the TLA’s annual conference. Photo by Adam Kveton.

But U.S. lawyers and an abysmal 2019 aren’t stopping the provincial government from making some changes with a view to long-term shifts in how the forest industry functions.

The last government “was focused really on shipping as many raw logs out of B.C as could be processed overseas,” he said.

Major changes included a new fee-in-lieu of manufacturing for coastal logs, and implementing waste penalties in coastal fibre recovery zones. Those reforms have seen adjustments and pauses being made by the end of 2019. But, thanks to the Western Forest Products (WFP) strike and a general lack of forestry activity on the Coast, the provincial government doesn’t have enough data to be able to tell if the changes are having the intended effect, he said.

He noted, however, that the government does not want to pile on too many consequences that the industry can’t absorb, and also acknowledged the difficulty families are having.

Donaldson said the provincial government has communicated its expectation to WFP and the United Steel Workers currently involved in the longest strike in B.C. Coastal forest history (reaching eight months) that they get back to the bargaining table and reach a deal as soon as possible.

Donaldson also referred to the $5-million trust the province has created ­– announced by B.C. Premier John Horgan the day before – for eligible coastal logging contractors to receive loans for payments on logging equipment. But some attendees at the conference suggested the funds are not enough. 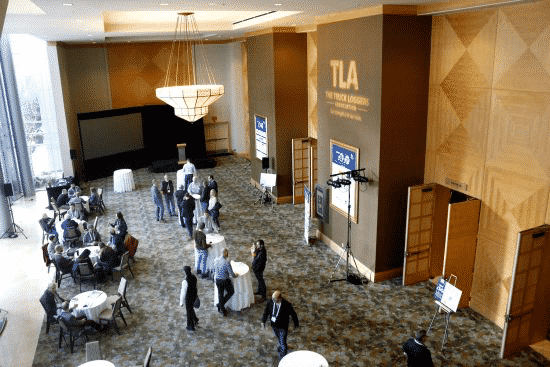 Making the most of timber supply

In a talk on Jan. 16, Robert Schuetz of Industrial Forestry Service Ltd. described the fibre recovery zones and waste penalties as ways to bolster the pulp and paper industry. He said he feels the government has been focused on the residuals side of the forestry industry for the last few years, noting the ongoing decline of sawmills in B.C. from 2,500 in 1955 to 344 in 1976 and 90 in 2019.

The demand for pulp logs, on the other hand, “is significant and it’s going to increase,” he said.

“When you look at the supply across all of B.C., the volume is there… There is enough volume. But is it economical? Probably not given the framework and lower cost traditionally of all of that volume,” he said.

With the residuals side of the industry at risk in a system focused on saw logs, the government’s changes are focused on recovering the considerable waste left in cut blocks to support pulp mills and others, he said.

Stew Gibson of Paper Excellence Canada suggested that penalties for leaving waste can work for the industry by eventually driving stumpage costs down and leaving profit margins. He noted that providing monetary benefits for taking costly waste out of forests could work too, but that the government is concerned that U.S. lawyers will equate that to subsidizing the industry.

In a presentation entitled “Solutions for Making the Most of Timber Supply,” Rob Stewart of Stewart Systems Inc. gave attendees a breakdown of his grinding and chipping operations. The company goes into cut blocks to process wood chips for pulping and does grinding to produce hog fuel, pellets and more.

He noted the benefits of having a contractor like him come in on a harvest, including a reduction in slash burning and waste. But a key to keeping his business viable is being part of the harvest plan from the start, allowing for roads and turnabouts that can accommodate his equipment.

Larry Fedorkie with Capacity Forest Management shared the perspective of small First Nations forest tenure holders, saying that many projects have been curtailed or halted due to the small size of the tenures and increased costs.

“We need to be successful on every project. We don’t have a margin for error,” he said.

He noted a careful balance between log exports and local manufacturing is needed to keep stands economic, and, without that balance, there will be fewer logs available for local mills overall.

“We all want to see the AAC harvested … Any costs or increased penalties and taxes at a time when margins are thin or nonexistent and few people are working will not revitalize the coast.” Larry Fedorkie, Capacity Forest Management

During a panel about forest tenure diversification, B.C. First Nations Forestry Council’s Charlene Higgins agreed with Fedorkie’s assessment that small tenure holders cannot bear the additional cost of waste penalties. However, she pointed to the consolidation of the majority of tenure within a handful of companies as a major problem, and suggested putting more land under the management of First Nations as a solution.

“First Nations want to play a bigger role in the management and stewardship of forest lands and resources, and industry wants fibre certainty,” she said. “This can definitely happen when we put more volume in the hands of First Nations. It’s going to create the certainty that everybody is looking for. Wood has to get to market, they do not have milling capacity.”

The challenge is that the forest land base is fully allocated. As such, Higgins believes the government’s most promising tool for providing First Nations and other communities with more tenure is apportionment.

“Apportionment really is defined as a discretionary decision by the minister on how the annual allowable cut, determined by the chief forester, can be divided,” she explained.

Last November, this was used to increase the available First Nations forest tenure in Quesnel, B.C., from 42,650 cubic metres to 162,500 cubic metres, as well as earmarking 77,000 cubic metres for new community forest agreements.

During the same panel, Jennifer Gunter, executive director of the B.C. Community Forests Association, promoted the benefits of community forests.

“Now is the time to rebalance the tenure system so the local communities, both Indigenous and non-Indigenous, have more control over land management,” she said.

By doing this, foresters can have greater access to sensitive land areas because the community itself is making the decisions and forests are managed more responsibly because decisions are made for the long-term by the people who live there. It can also create more jobs and even opportunities over the winter when larger companies aren’t working, better collaboration on fire planning, and profits can and often are redistributed back into the community, Gunter said. 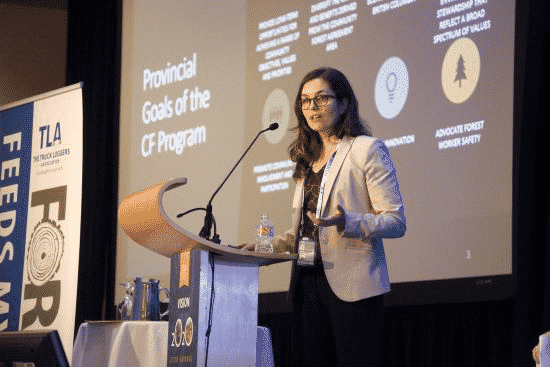 Community forests aren’t just about the money, though, of course, economic benefit is still amongst the highest priorities, she said.

“It’s about being able to link forest management decisions and styles with community development objectives.”

After a question from the audience, Gunter acknowledged that community forests have a lower stumpage rate, but said that’s necessary for success and appropriate because the provincial government expects greater forest management.

‘Keep the heat on’

These and many other presentations made for a dizzying array of possible ways forward for the B.C. forest industry and the province’s truck loggers, but few, if any, immediate supports for a struggling industry. 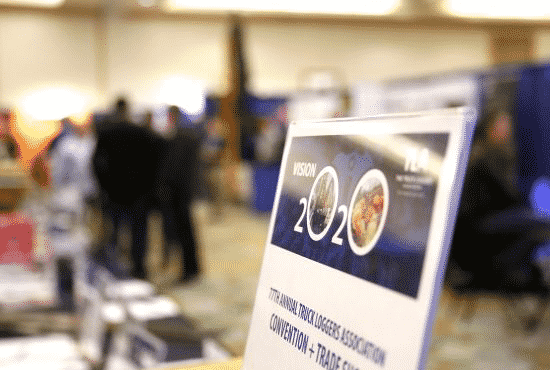 While Premier Horgan and Minister Donaldson encouraged those in attendance to continue to use their voices to push for change as they did in September when over 400 truck loggers drove to Vancouver, and others envisioned major changes to the tenure system, some remain convinced that it’s politicians like Horgan and Donaldson who need to get out of the way of the industry.

“It’s a great industry,” said TLA director Barry Simpson at the end of Taylor’s presentation. “We have customers that want to buy our product and we have product to make and we’ve got a government that’s stopping us from doing that, so we’ve got to keep the heat on.”

WHO ARE WE?
FIND OUT.